Charter Fishing for Wahoo out of Stuart, Florida 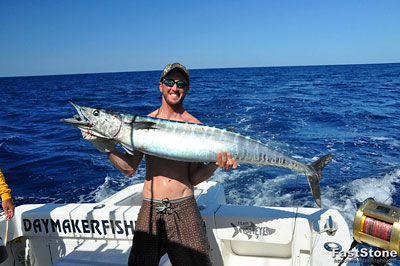 Trolling (the method we use for catching Wahoo) for Wahoo out of the St. Lucie Inlet in Stuart Florida can be hit or miss year round - there isn't really a consistent Wahoo fishing season.  The best time of the year to target Wahoo would be in the Winter, October through February and again in the Summer months of August and September.  Most Wahoo catches are accidental during the Winter months because of the desire to pursue Sailfish with monofilament leaders.  If you desire to catch Wahoo during the Winter months just specify this to your Captain at the time of your booking and the proper changes will be made.  During the summer months high speed trolling baits and lures are the most effective method for targeting the Wahoo that hang along the ledges and structure between Stuart and Jupiter inlets.  The average weight of the fish caught locally is around 25lbs with fish over 50lbs not uncommon.

Wahoo fishing trips to the Bahamas

Some of the best Wahoo fishing in the world occurs on the Bahama Bank during the winter season and can peak in the months of February and March.  These fish average 45lbs with many fish caught over the 70lb class.  It is common to catch your limit of wahoo on the Bahama Bank when high speed trolling for Wahoo.  This is a unique method fishing with 50lb tackle and trolling lures at speeds between 13-15 knots.  Wahoo is one of the tastiest fish we catch and is a prized catch.  The meat freezes well too.  If you are looking to fill your freezer with Wahoo meat than a two day fishing charter for Wahoo to the Bahamas is the trip for you.   Learn more about our fishing package trips to the Bahamas.  Passports are required to make this unique fishing trip. 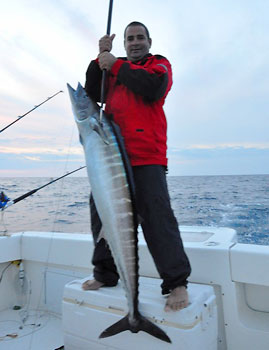