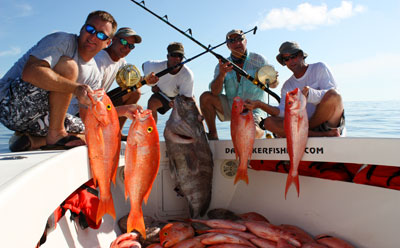 One of the Captain's favorite styles of fishing because you never know what you will catch.  With this method electric reels are used with a multiple hook rig commonly called a chicken rig.  Chunk bait or squid is used for best results.  Fishing in depths ranging from 400-2000ft of water you can expect to catch multiple species including Escolar, Yellow Eye Snapper, Queen Snapper, Silk Snapper, Black Snapper, Button Snapper, Snowy Grouper, Yellow Edge Grouper, Wreck Grouper, and Mystic Grouper.  The biggest of the Snapper species would be the Queen and Yellow Eye which reach weights in excess of 20lbs.  Queen snappers are the deepest dwellers of any snapper species and, generally, bigger fish are found the further down you go. Younger and smaller Queens live at mid-range depths. At greater depths they swim in schools so the chances of multiple fish on the hook are quite high. Queen snappers remain something of an unknown because of the depths they live in and this rarity explains part of their allure, as does its exceptional taste. Like a lot of bottom dwelling fish, Yellow eye snappers are also fantastic table fare. They also live in schools deeper down and, like with Queens, a common challenge is pulling the fish up past the many predators like sharks and barracudas.

The Mystic and Wreck Grouper will reach weights in excess of 100lbs.   All the meat freezes well and is extremely tasty from these deep cold water fish.

Deep Dropping is a method of fishing we do in the Bahamas on multiple day fishing charters.  Passports are required for these trips